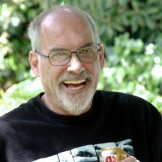 For over 40 years Pete has  been producing TV commercials, documentaries and films for clients all over the world: Primarily as Executive Producer for TV commercial production companies, including his own. He's had the good fortune of working with the renowned Director and DP, Haskell Wexler in one of them.

Among his credits, he produced the award winning, theatrical short, Blaze Glory, which had a long run on the “Glenn Campbell Show," and American Airlines In-Flight Movies.

Later, with his own production company, he expanded his activities into computer gaming, producing the live action backbone for Star Trek/Star Fleet Academy, starring William Shatner, George Takei and Walter Koenig in their original roles of Captain Kirk, Sulu and Chekov.