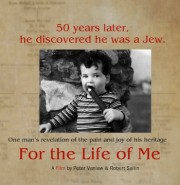 Studio City, CA, November 24, 2015 (Newswire.com) - Peter Vanlaw began “FOR THE LIFE OF ME” in California as a class project back in the year 2000. As it took shape over the years, it developed a life of it’s own. So It was rather unique that the latest screening was back East in a place of higher learning were penetrating stories are welcome. In this case, in Connecticut and Suffield Academy.

Founded in 1833 as a classic Eastern Prep School, less than two decades ago it put on a new face, became co-ed and began appealing to 9th thru 12th graders from around the world. This has given it an enlightened perspective and a broad spectrum of students

"The profundity of this film has touched me deeply. Now, more than ever, the civility of all relationships and future of humanity depends on the knowledge of the Past."

His film uncovers the identities and histories of the family members he never knew. It also becomes a lens through which we are able to look back at a life style in prewar Germany that no longer exists. It then morphs into the stark images of WWII and the Holocaust, where we witness the impact on the lives his relatives.

When Peter was 50, he suffered a heart attack. Only then did he learn that his family was Jewish. After 50 years of living as a Gentile, the shocking revelation compelled him to learn the truth. That’s when he discovered reels of home movies and hundreds of family photos left behind when his parents passed away. Piecing together his family’s mysterious history, Peter weaves old home movies and family pictures into a fascinating documentary, as we become witnesses to the impact Hitler and the Holocaust had on their lives...and his own.

After the screening and Q&A, the students began to understand the meaning of the phrase, “anti-Semitism” and its devastating impact going back centuries, and the revelation that “hatred” continues today, having metastasized in anti-black, anti- immigrant, and now, today in our own schools in the insidious form of “Bullying”.

The screening was held in the “Chapel”, which is actually a Baptist Church that doubles as a place of worship for the people of Suffield. According to Vanlaw, “The entire student body was in attendance along with almost the entire faculty. As a result we had our largest audience ever - around 500 people.”

But Peter is now faced with a dilemma. “We can’t show the film in public until we get the proper licenses for the stock photos, film clips and music that we’ve used”, he said, “And we have to raise the money to do that. Then we’ll have a real historical film that can be used to educate a generation that wasn’t around when these events happened.”

Contributions can be made through the IDA (International Documentary Association): http://www.documentary.org/film/life-me.

Here’s the link to the trailer:  https://youtu.be/ar3E89jhRhw

"The profundity of this film has touched me deeply. Now, more than ever, the civility of all relationships and future of humanity depends on the knowledge of the Past.” Leslie Zurla – Producer/Teacher

Documentary, family, FOR THE LIFE OF ME, history, jewish, Peter Vanlaw